At one point, the Boston native juggled four different part-time jobs. That work ethic came from his father, a Korean War Veteran who invited a U.S. Army recruiter to their home so that Dwyane could enlist. “I was off to boot camp at Fort Dix, New Jersey,” Dwyane recalled. 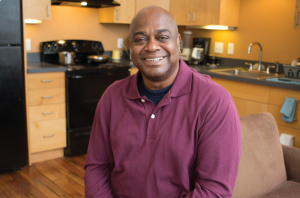 He looks back on his Army service with pride and gratitude, because it led to a series of jobs at computer manufacturing firms. When those manufacturing jobs disappeared, Dwyane worked as a shipping clerk, security guard, driver, and painter.

Despite cycling through multiple jobs, Dwyane knew he wasn’t getting anywhere. He was frustrated. “I was 53, and I still hadn’t decided what I wanted to do,” he says.

It bothered Dwyane that he hadn’t settled down and that he moved in and out of Boston, sometimes staying with family members. Then a friend encouraged him to see what the New England Center and Home for Veterans offered.

Dwyane took that advice, and his life changed.

After meeting with a case manager, he moved to the Center’s transitional housing unit. “I set a goal that I would only stay for six months,” he says. NECHV’s ambitious $35 million renovation was underway. “When the building was completed, I’m proud to say I was one of the first people who got to sleep in that brand-new environment.”

Living on-site, Dwyane took advantage of valuable guidance from an employment specialist. “All these years, I tried to figure out what I wanted to do. With her help, I decided to get my commercial driver’s license. It’s perfect for me.”

Dwyane was open to moving out of the area, so when an NECHV housing specialist said he qualified for his own apartment in New Bedford, he jumped at the chance. Now he lives in a building with other Veterans and works at a nearby human service organization where he oversees the food bank. “They love me as an employee,” he notes. “When I have my commercial driver’s license, I’ll be able to drive for them.”

Settled down, in a job he loves and living in a comfortable home that he can afford and where he has privacy: with help from the NECHV, Dwyane found his place. Every day, 24 hours a day, our Center in downtown Boston welcomes Veterans who, like Dwyane, need our services to regain control of their lives.

This is what we want for each person who seeks help at the New England Center and Home for Veterans. Your support will help us get there.