Steve Creedon had nowhere else to go, so he picked out a bench on the Boston Common. 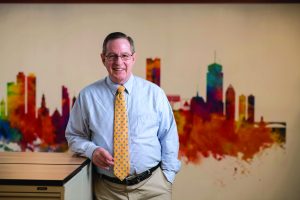 “I didn’t have anywhere to live,” recalls the Milton native. “That was my circumstance.” He lacked financial resources, but his health was of greater concern.

Steve, now 66, saw the irony of his situation. “I had been the manager of the Frog Pond on the Boston Common, and a few years earlier, I worked as a personal assistant and lived with millionaires just up the street,” he says. But in 2014, he needed help. As a U.S. Navy Veteran who served during the Vietnam War, Steve had another option: the New England Center and Home for Veterans.

At the most vulnerable time in his life, he was welcomed and provided with housing.

“I was on standby for heart surgery, but the Boston VA Hospital wouldn’t operate unless I was nearby and had a residence. That’s when I walked into the lobby of the Center.” Steve was welcomed at the Center and immediately given a place to live. He had his surgery and was able to recover in a safe and stable environment.

“I learned Morse code at the naval station in Quincy and was sent to the Naval Communications Center in Pensacola, Florida, to become a cryptography technician – a code breaker. I was 19, and I enjoyed the challenge.” He says the experience matured him. “One of the reasons I was willing to serve was because two friends were killed in Vietnam. Both were good guys.”

While stationed in Puerto Rico, Steve suffered an injury that required multiple surgeries, including the amputation of his big toe. Despite his plan to proceed with a career in Navy intelligence, he retired due to his physical disability. Once back on his feet, he became an emergency medical technician, graduated from Suffolk University, and worked as a resident property superintendent and personal assistant. But by 2009, Steve was in trouble.

“The economy had gone south in 2008, I didn’t have a job, and it was clear the economy was not going to rebound.” He moved to Costa Rica, where he could afford to live, and was married. “That’s when my serious health issues began.” After recovering from heart valve surgery in 2014, he returned to Costa Rica, and the turmoil began: Steve’s wife died, and new health problems arose.

“I needed an aneurysm repair. My circulation was terrible: I couldn’t walk more than 50 steps.” In 2016, he was welcomed back to the Center, where he lived for six months. He had the surgery and procedures he needed, and he met with a housing specialist.

“He counseled me on how to apply for housing and encouraged me to be patient. It paid off: I now have an apartment at the Charlestown Navy Yard. Although I have some physical limitations, I’d like to work again.”

Today, Steve is optimistic and the New England Center and Home for Veterans helped get him there – to living independently, to being able to look ahead, to wanting to contribute.

We exist for one reason: to help them, however we can. “You don’t come to the Center for a group hug,” Steve notes. “You come here because you’ve hit the bottom of the barrel, and you don’t have a plan B. I’m a graduate, so I know. It’s a haven.”

A haven: any Veteran who has received services – housing, employment, education, or any other support – at the New England Center and Home for Veterans will agree.